ztta/roll_first: This is the first area of memory assigned to a work process. This parameter is usually set to 1 as a technically necessity as the modern applications will end up using more memory than the first roll segment. Even if ztta/roll_first is set to 1, the minimum amount required for administrative data is allocated from roll memory. It is best to leave the parameter at 1. 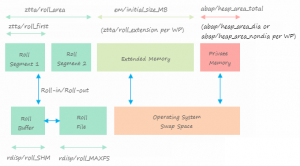 abap/heap_area_total: When a dialog work process consumes Roll and Extended Memory available to it, it continues the transaction execution from heap memory. abap/heap_area_total restricts the total amount of heap memory that all WPs can use. If you set this parameter to 0, it will translate to 1 TB. This value should be decided based on swap space available to the OS.